After being sick for nigh on two weeks, I woke up feeling slightly more human today for the first time. While finally getting to enjoy a cup of coffee this morning, I decided to peruse some of my old Renaissance art history books to see if I could find anything mentioned that was here in Bologna. Sadly, not a lot popped up, other than some sculptures I’ve already seen (but haven’t blogged yet; must fix that). However, one thing did show up that was exciting: bas-relief sculptures by Jacopo della Quercia! Right on the facade of the Basilica di San Petronio! 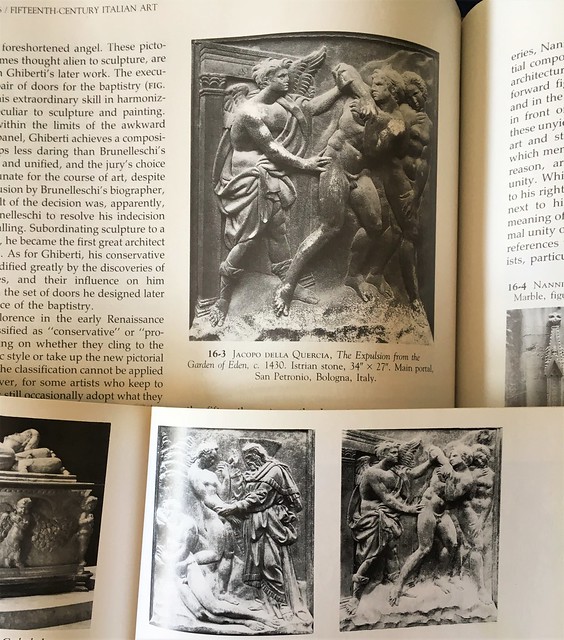 To look at the tiny black and white photos in my old text books, you wouldn’t really expect them to be so easily viewable. Yet they’re right there surrounding the main door of the basilica! When something is that easy to get to and I can even take Charlie with me, I couldn’t resist. So despite still feeling a bit weak from being sick, I was determined to go see some Della Quercia! After a fairly leisurely walk on a beautiful sunny morning — and a stop for Charlie to get cuddles and admiration from a random stranger — we arrived at the basilica. 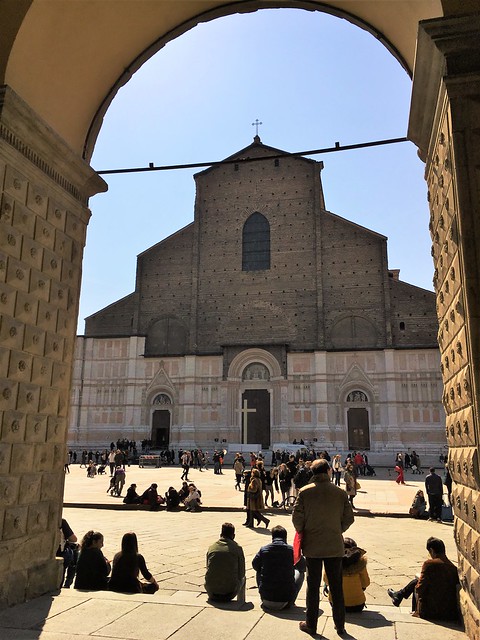 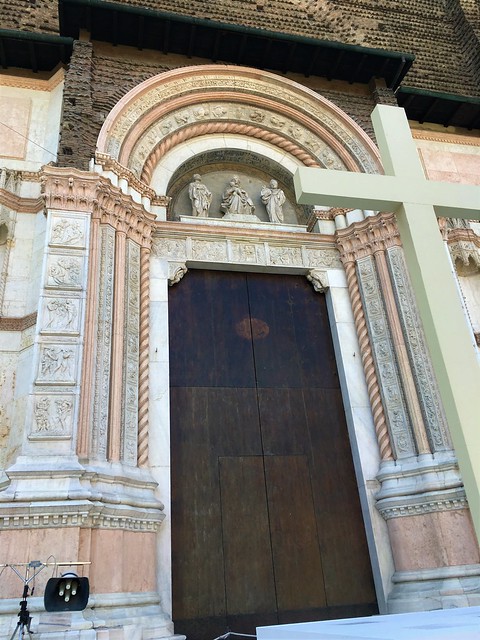 Unfortunately, the whole main area at the top of the steps was roped off and it looked like they were setting up for some sort of presentation. There was also a massive cross right in front of the main door. I was left standing on the top step with Charlie intent on all of the dogs in the square behind me. That made me a bit paranoid about him suddenly taking off and me tumbling down the stairs. As I mentioned, I’d also had my first coffee in two weeks and I had the shakes from the caffeine. So trying to hold the phone steady, while in zoom mode, and worrying about Charlie, I ended up with pictures that could have been a bit clearer. Still, I got to see them and I can always go back another time and see them slightly closer up, even though they’re fairly high up around the massive front door.

The panels on the left of the door are mainly the creation of Adam and Eve, eating from the tree of knowledge, and the expulsion from paradise. To be honest, I didn’t look as closely at the ones on the right, so I’m not positive what some of the topics are, though I’m pretty sure the bottom panel is the story of Abraham and Isaac. As I said, I need to go back. Della Quercia also did the figures in the tympanum above the door.

Jacopo della Quercia started the works around 1425. His style was much sparer and cleaner than was typically seen in similar works in Florence at the time. There’s more focus on the main figures and less background scenery, which makes the scenes more forceful and powerful and enables them to stand out more given their physical position. In situ, above the heads of those entering the church, the bolder figures stand out more clearly. In fact, Michelangelo was a fan of della Quercia’s work, and the similarity in the strong, simple figures of both artists is fairly evident.

So, the next time you’re in the Piazza Maggiore, go take a gander at some Renaissance sculpture right there surrounding the main door of the basilica. For me, being able to pop out on a whim to see some work by a sculptor I remember studying at university is pretty awesome. 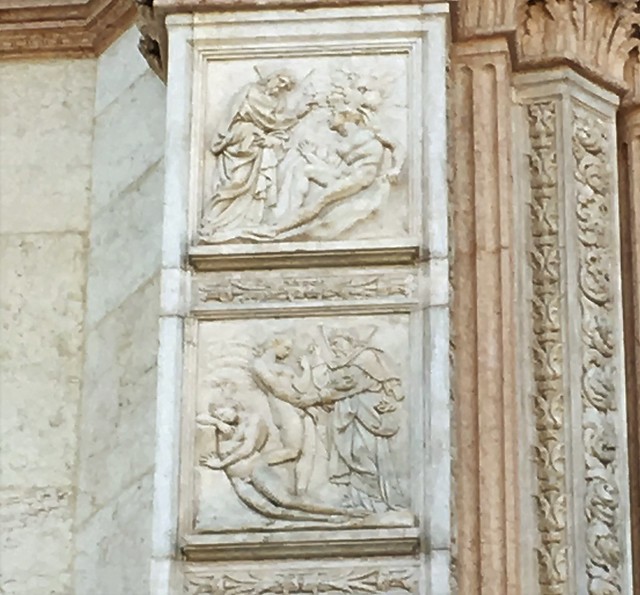 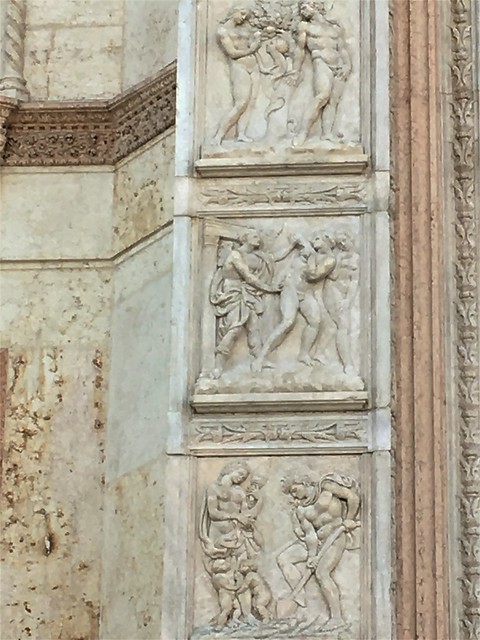 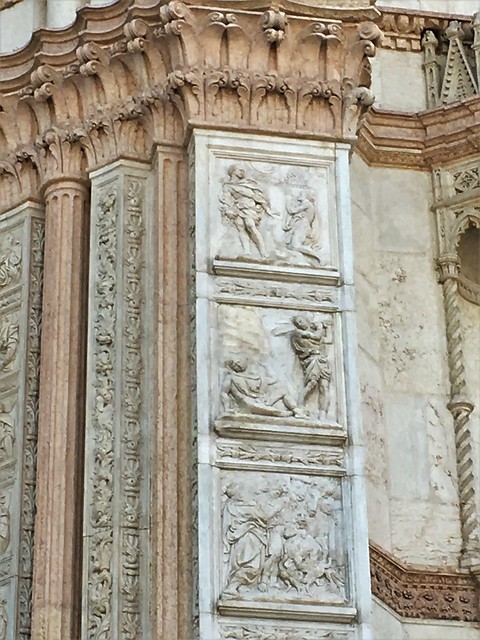 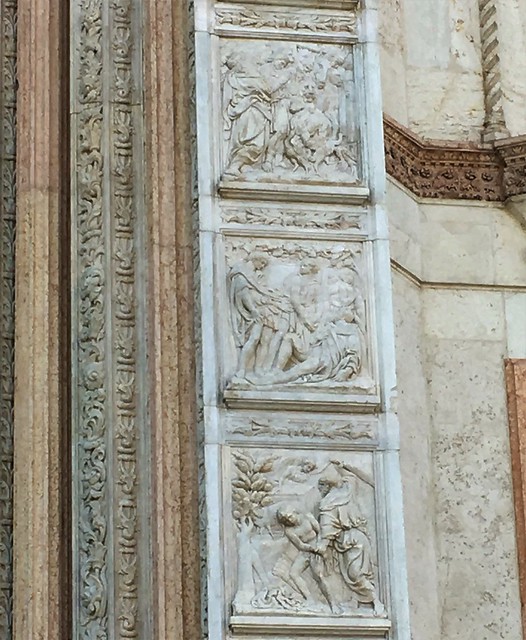