I tend to keep what feels like hundreds of tabs open in my browser for ages. I’m not gonna lie, I kept one open in Utrecht for probably a couple of years, always meaning to go visit this particular Rietveld-related spot. I never did, but I’m trying to be better both about visiting spots I want to see and closing tabs. Usually, the two are related. Yesterday, I ended up visiting two locations I’ve been wanting to visit (one was a surprise), so once I finish this post, I can close at least one tab for now. 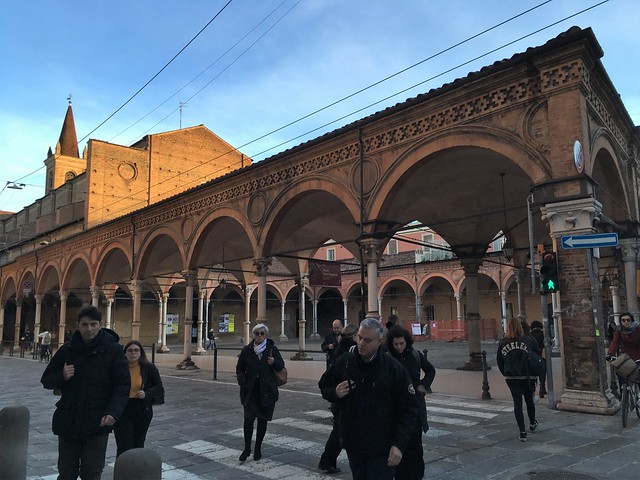 Through various old photos and Instagram posts, I’ve been wanting to see the courtyard of the Basilica di Santa Maria dei Servi. I also wanted to go inside, because they have a Cimabue Enthroned Madonna painting, but that is for another post. So yesterday afternoon, at the start of my birthday celebrations, we went to church. (We’re both atheists, but I do have a fondness for religious architecture and art. My mother teased me when we talked beforehand about me bursting into flames.)

As soon as we got close enough to see the street corner it starts on, I immediately recognized it. You see, Santa Maria dei Servi is known for the colonnaded courtyard that surrounds the small piazza in front of the church. Although there’s the church at one end and another building on another side, there are still columns/portici all the way around, with two sides open to the street. It’s a pretty impressive sight, even if the facade of the church was never finished. The courtyard more than makes up for it, plus there’s the long stretch of portico that runs along the north side of the church. 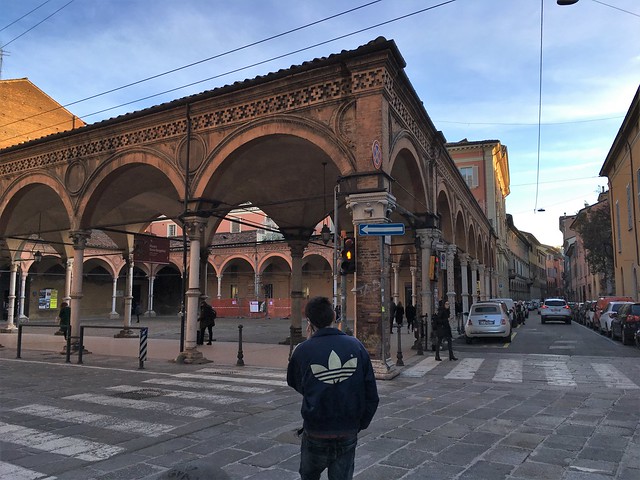 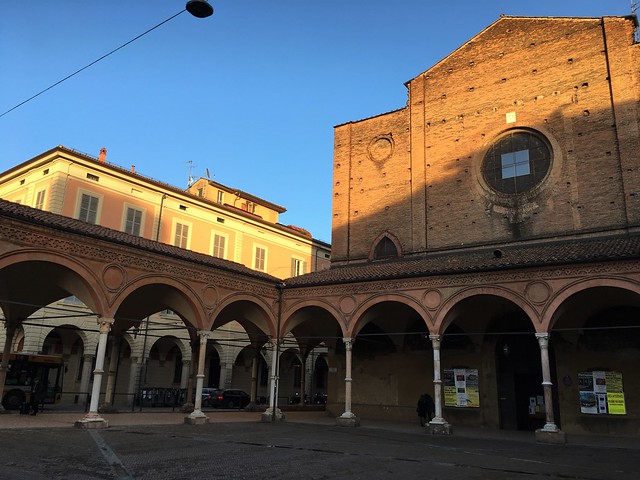 The church was founded in 1346, with the start of the portici in 1393, though the main construction and final completion of the bulk of the portici went on from the 16th to the 19th century. And I thought I was a procrastinator.

The design of the portico may have been influenced by the arcade of the Ospedale degli Innocenti in Florence, built by Brunelleschi. The design does have a number of similarities in the circular mouldings (similar to the tondi) placed on the spandrels (the triangular section between two arches). Also, when in Florence, I recommend a visit, particularly if you appreciate architecture. 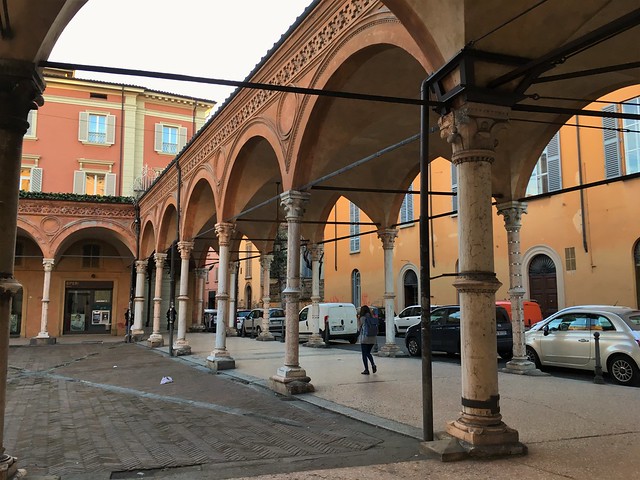 We were there shortly before dusk, so we got a mix of shadows and glowing sunlight. The facade may not be decorated, but at sunset, it’s pretty glorious and golden. I also love the northern portico that stretches the length of the church and how particularly wide it is compared to most portici. Once again, if you enjoy architecture, I think this should definitely be worth a visit if you’re in Bologna. There’s a shabby chic element to the church and its courtyard; aged, but still beautiful. 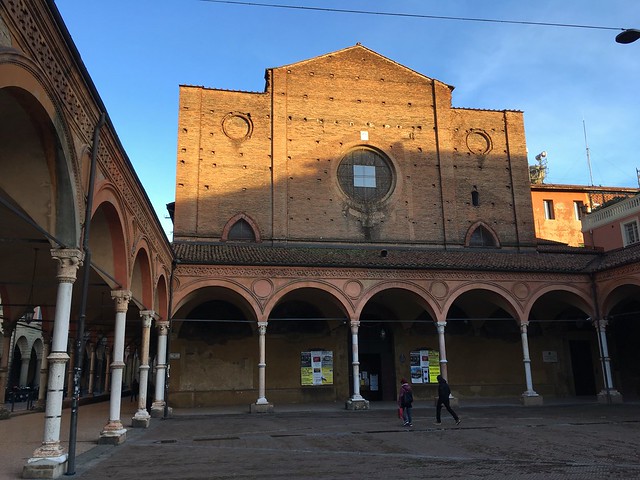 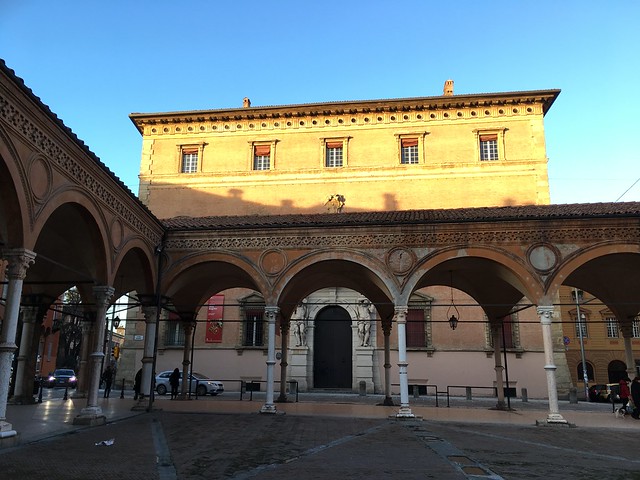 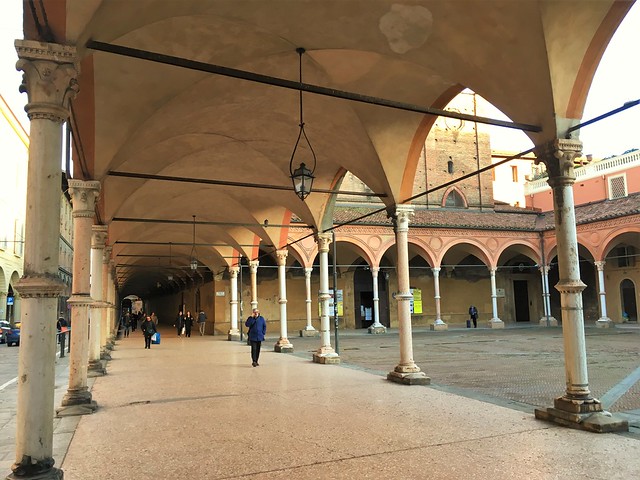 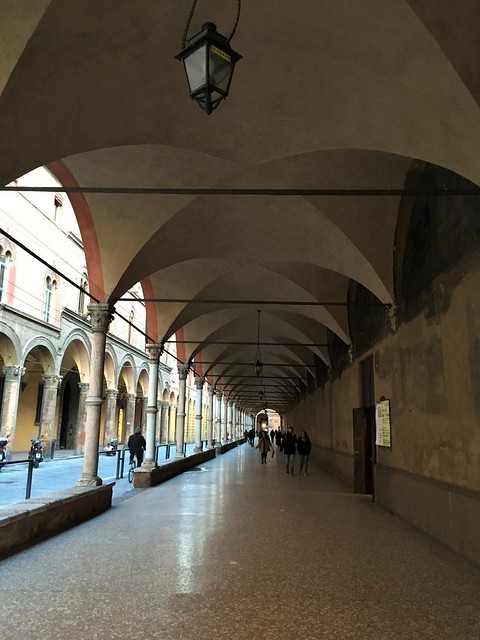