Today is my birthday. It’s also my parents’ wedding anniversary (I came along three years later.) It’s also International Women’s Day. So a pretty awesome day already! And this month the #DolceVitaBloggers theme is inspirational women. I’m a lifelong feminist and am inspired when I see any woman fighting against unjust restrictions or breaking out of out-dated boundaries, or just being awesome in general. I certainly have women in my own family who have been influential and inspiring, including my own mother, who certainly inspired me to see the world and not just my small piece. She also always encouraged me to get a good education and she and my father gave me a good head start with both their own teaching, as well as enrolling me in a Montessori school when I was in pre-school. 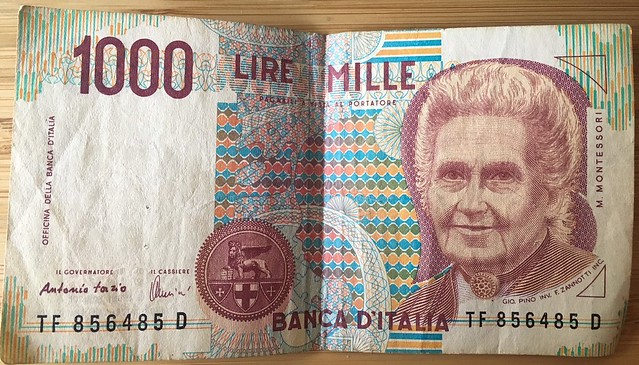 I’ve been carrying around this old 1000 lire note in my wallet for at least 16 years if not longer. I happened to be here in Italy during the switch from lire to euros and 1000 lire wasn’t a big deal to hold onto rather than switch, and I liked that Maria Montessori was on the note. (The Caravaggio one was worth a bit more, otherwise I would have kept him, too.) I’ve always found Montessori inspiring, since I learned about how she achieved her own education and influenced in a positive way how others (including myself) would learn.

Dr. Maria Montessori was born 31 August 1870 in the town of Chiaravalle, Italy, to parents who valued education, even for a daughter, which was obviously less common at the time. In fact, she eventually attended the Regio Instituto Tecnico Leonardo da Vinci, planning to becoming an engineer. However, after graduation, her parents wanted her to become a teacher, as was more appropriate for a woman. She had other ideas, though. She wanted to go to medical school.

This is where things got challenging and it eventually took a papal intercession from Pope Leo XIII. During the fight to earn her place at medical school, she still continued her studies, attending the University of Rome, where she focused on physics, maths and natural sciences, and getting her degree in two years. At this point, and with the papal involvement, she became the first woman to enter the Faculty of Medicine in Italy.

It was hardly easy sailing once she got into medical school. She wasn’t necessarily received well by her male colleagues and even had to do disections on her own as those weren’t allowed to be done in mixed classes.  [Excuse me while I roll my eyes, then remember that an American politician (male, of course) banned a female colleague from using the word vagina when discussing a woman’s reproductive rights. Now excuse me while I cry that we seem to still have a long way to go.] Still, through it all, she persisted, and she became one of the first female medical doctors in Italy on 10 July 1896.

As well as working in medicine in various positions, including surgical assistant, she also gave international speeches on the rights of women. Eventually, while working with children in an insane asylum, she began realizing that children needed sensorial stimulation and physical activities. Within two years of becoming a doctor she was already seeing a connection between social reform through education.

Eventually she became more involved in the education of children with various issues of mental development, and began studying educational philosophy and anthropology. All of this culminated in the opening on 6 January 1907 of the Casa dei Bambini or ‘Children’s House’. She included various materials and activities and saw which ones actually engaged the children. Ultimately, she saw that children have a natural curiosity and an inclination to educating themselves when given the chance. She believed in treating children with respect and letting them try and complete tasks on their own, when they know they can succeed.

By 1908, there were five Case dei Bambini in Italy. Within a year, the Italian-speaking part of Switzerland started changing its kindergartens into Case dei Bambini. In 1909 she gave her first training course on her approach to 100 students. She soon wrote a book and by 1912 the book had been translated to English and reached second place on the US non-fiction best-seller list. Eventually Montessori schools would spring up all over the world, including Orlando, Florida, where I attended one. I do have fond memories of what was probably self-guided play to a large degree, but with objects that made me curious and want to try new things.

There’s a lot more to her story, including her personal life, which was somewhat unusual and still fascinating. I certainly recommend reading more about her. And to finish off my own vague connection with Dr. Montessori, it turns out that she passed away peacefully on 6 May 1952, in the Netherlands.

Thanks again to Kristie (mammaprada.com), Kelly (italianaheart.com), and Jasmine (questadolcevita.com) for hosting the #DolceVitaBloggers linkup. I’m looking forward to reading more about inspirational women, both personal and famous.

Leave a Reply to a mindful traveler Cancel reply