Here’s Charlie putting the cane (dog) in canapa (hemp). What do you expect from a Dutch dog? While out walking this morning, his nose zoomed in on Qui Canapa, a hemp/grow/seed/head shop in Bologna. This discovery was soon followed up by a long sniff around the nearby pizza restaurant. I’m not kidding!

Charlie probably recognized some of the scents coming from the hemp shop. After all, in Utrecht, we had three “coffee shops” within a 3-5 minute walk from our house, and one of those places was actually a boat, known as the Culture Boat! (The larger white/blue/red boat on the right.) 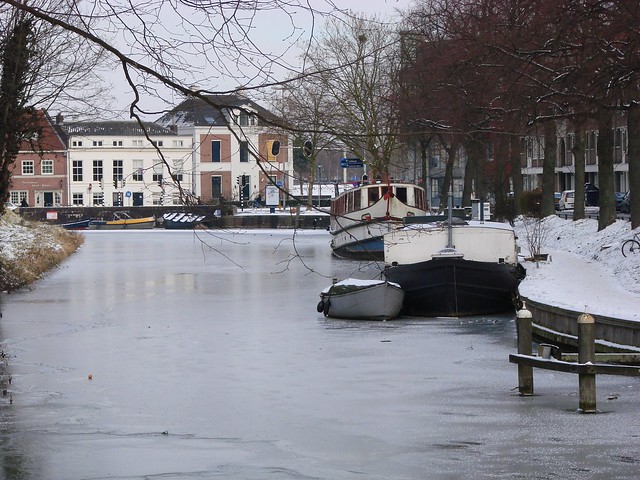 Despite the Dutch reputation, most people don’t smoke weed/pot/hashish. Tourists and university students probably make up a large portion of the customers, with a few other local regulars. You smell it on occasion, but it’s not like everyone’s stopping in to a “coffee shop” or culture boat on a regular basis. Plenty of people don’t bother at all.

Still, I had to laugh when I realized what the shop was that Charlie was sniffing around so intently this morning. Of course the Dutch dog found the head shop in Bologna. In another bit of synchronicity, I received an email today from Philip Lindeman, a Dutch artist I’d written about a few months ago for my Utrecht blog. He did a great mural on the wall outside of one of the head shops in Utrecht. It’s almost like the universe is trying to tell me something …

Seriously, though, the shop isn’t a Dutch “coffee shop”. Per their website, they are a shop, but also an information point as part of their aim is to make people more aware of the uses of hemp, both in therapy and in a wide range of products. Hemp has long been used for a variety of purposes that had nothing to do with getting high. In fact, the shop sells pasta, beer, chocolate, oil, face creams, bags, t-shirt, glasses and more, all based on hemp/canabis. Hemp is an easily renewable resource, so I’m actually interested in going in some time and checking out what they have to offer. I think Charlie wants to go, too.