One of the things I love about so much of Italian architecture, particularly Renaissance or Renaissance-inspired architecture, is a good big architectural doorway. When I studied Italian Renaissance architecture, I certainly saw plenty of architectural doors in the palazzi, but had no true sense of the scale just by looking at photos. It wasn’t until my first trip to Italy that I truly began to understand just how magnificent they can be. Now living here, I find myself constantly peeking through any big open doorways I can find and usually wondering what is behind all of those colossal closed doors.

Florence — my Renaissance architectural heaven — was the first stop on my first trip to Italy with a friend. Taking the advice of Miss Lavish from A Room with a View, I was determined to ignore my Baedeker (well, my map of Florence). I had studied enough of the city’s layout that I thought I could find many of the major things to see in Florence without needing to consult a map all the time. I wasn’t always right, and there’s a whole story about a defeated search for the Boboli Gardens, but I’ll save that for another time.

It was on one of our wanderings around the city, looking for one thing, that I found another. Walking down what seemed like a narrow alley, I looked up at the building on my right and realized it was the Palazzo Medici. With a chorus of hallelujah’s echoing in my head, I raced around the corner and found the front of the palazzo. And drew up short in amazement at the sheer size of the door! My love of grand Italian doorways was born.

From Florence to Bologna

Bologna has its own share of big doorways that vary from what I think of as Dutch size (i.e., really tall) to giant size. There’s a rather glorious set of large wooden doors with a chain through the handles on Via Irnerio that I pass quite often and long to see what is behind them. But that’s just one set of doors. They’re everywhere!

On Sunday, while out for a walk, we happened to pass a set of decent-size doors with one temptingly open. I couldn’t resist and managed to get a few quick snaps into the hidden world that lies behind the doors. In this case, it looked like a beautiful sunlight-yellow building and some lovely vaulting. That’s the stuff daydreams are made of! Well, for me anyway. 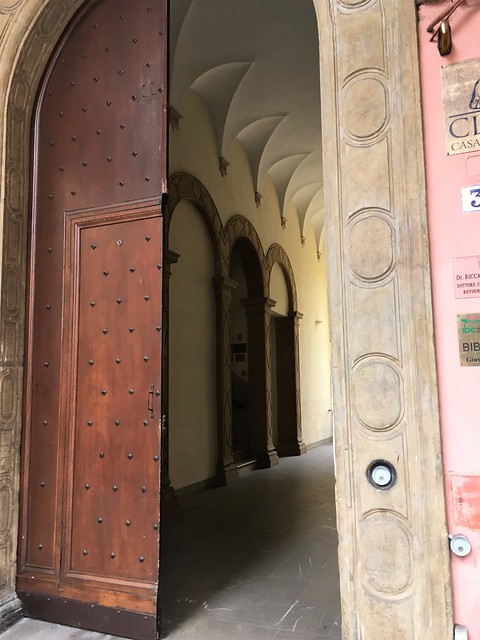 In the Netherlands, I got to satisfy any vague hints of voyeurism thanks to the practice of large windows without curtains, which is all part of the Dutch concept of having nothing to hide. It’s a bit different here, so I can’t help but want to peek behind these big wooden doors. There are all sorts of visual surprises just waiting to be seen. Just imagine what’s behind this grand architectural doorway! 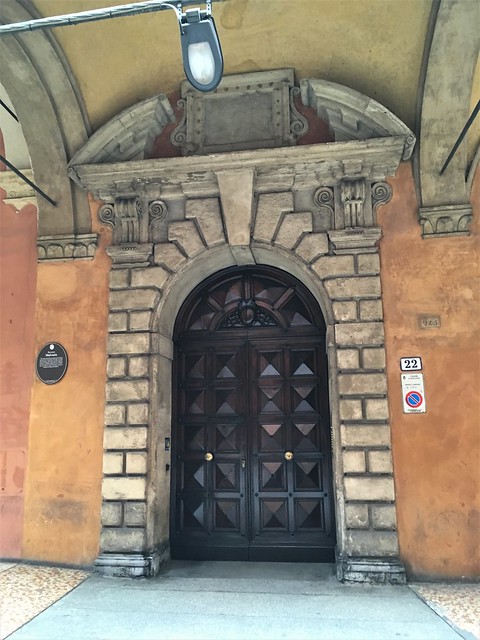